i love our city!

Posted by elizabeth in family

techinically, we’re much closer to the city of Butler, which was recently named one of the 10 best small towns in the U.S. according to the Smithsonian magazine,  but today, i’m referring to Pittsburgh (which also has its ranking in a popular magazine lists), the city in which i grew up. i still think of Pittsburgh as “our city” since we’re really only an hour outside of it, and kenny and i met and started our family there. although i’m now a 6-year-old country girl and could seriously consider growing old in the country, i still think The City is a great one. 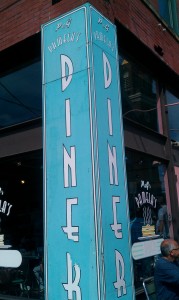 our big-little city brings the best in the worlds of culinary arts, theatre, sports, music and family-friendly educational centers (ie, museums). it’s been a long time since we just spent a day walking around the wonders of pittsburgh, but this weekend we were able to do a bit of that on saturday with friends that just recently moved to pittsburgh. it was as if we were tourists, and they were our tour guides.

we started with breakfast/brunch in the Strip at Pamela’s.  kenny and i used to frequent the shadyside, oakland, and squirrel hill locations but had never been to the Strip location. i just noticed that their web site lists two other locations that we need to check out (millvale and mt. lebanon). Pamela’s has been around as long as i can remember. there are many, many places to get a good breakfast in the ‘burgh, but Pamela’s seems to always win out. it’s because of their crepe pancakes. Even President Obama prefers Pamela’s over any other Pittsburgh breakfast.

after a very filling breakfast, we hit up Peace, Love, and Little Donuts for some…little donuts! they’re so small that even after a huge breakfast, a few bites of a non-greasy-tasting lovely little sugar-cookie donut was perfect. we had to take a stroll through the Pittsburgh Public Market since it was on the way back to our car where we were pleasantly surprised to see an old friend in her own traveling espresso business, Caffe d’Amore (hey, sarah!).  i love that pittsburgh has added a “covered market” to its already long list of awesome offerings. i think the public market will grow into something bigger as it “gets older.” it’s a great location (the strip!) and it offers quite a lot of different things: food, drink, local, art, etc.

we then headed over to the Carnegie Science Museum where i wasn’t sure how long we’d stay due to some over-tired boys. but as it turned out, it was the best medicine for the grouchy,tired youth in our midst. we stayed in the SportsWorks center the longest (an hour and a half? two hours?) and then hung out with the robots and the miniature trains on the second floor. by then we were all tired and headed home.

that was a 6-hour day in the downtown area of pittsburgh and it was full of awesome. we didn’t even touch the other great 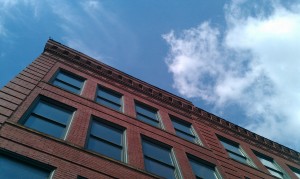 pittsburgh things (theatre or outdoor summer concerts), so we have many more day trips in our future. when we moved WAY out to cow-country, i vowed to take day trips with the boys into the city at least every-other-week. that never happened. it turns out there is a lot to do out here as well, if you don’t mind a slower-paced way of living. which i have grown to love.

but it’s a reassuring to me that the city is just a short drive away, and if i’m craving some thai food, or a BIG library, or an outdoor music festival on a hot summer night, i know just where to go. 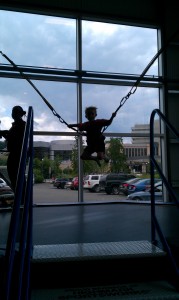 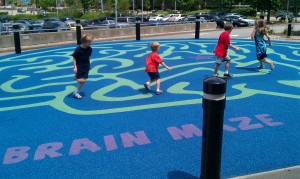 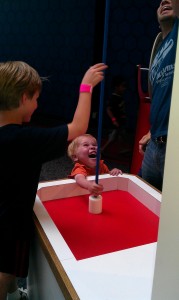 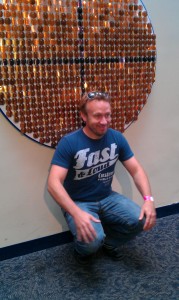 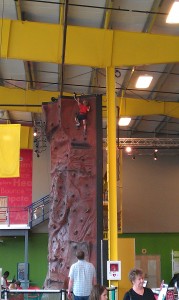 adam, climbing the 24-foot climbing wall. 24-feet doesn’t sound very high, but it was high enough if you ask me!