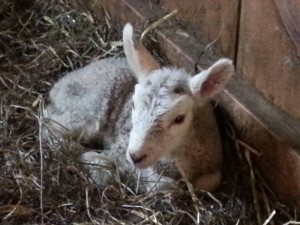 …at least we hope so!  we have one more ewe, but we do not think she is pregnant. or if she is, she is a month away from lambing because she is showing no visible signs of carrying. it is possible that we could have a late may/early june baby from her, but we are hoping that lambing season is done. this season has been a doozy!

our last set of twins was born without our assistance (what we were hoping for!), but it also happened at the crack of dawn, just before we arrived at the barn to check on our last pregnant ewe (daisy). in fact, she delivered outside of the barn, under the “porch” (probably because the barn was too crowded with other sheep). 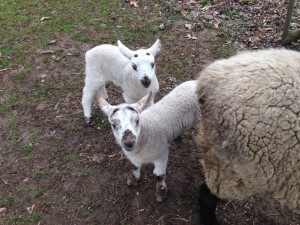 kenny and i walked towards the barn after we noticed that daisy was on the porch with two white lambs. as we walked nearer, we noticed she was head-butting one of the lambs and not allowing it to get near her.  there was a larger lamb already cleaned off and sitting up, alert but daisy wasn’t cleaning off the smaller one and was in fact showing signs of rejecting it. this is yet another lambing experience we had not encountered, so we set off into learning/experiment mode. the first few hours of a lamb’s life are crucial in getting it to bond and eat. when the mama isn’t allowing the lamb near her milk source, you have to get creative.

rosie was still in the lambing pen with ramburger. so we let them out and they headed out to pasture. we picked up daisy’s lambs and carried them into the pen hoping daisy would follow. she wasn’t as eager to be near her lambs as the other mamas we had, so we had to coax her in with the one lamb she was seemingly accepting.  she finally made it back into the pen with her lambs and again was head-butting the smaller lamb (they are called “bummer” lambs). we kept them in the pen, and headed to do some research on tricks to get a mama to accept her lamb (which usually doesn’t work), or ways to get the bummer attached to another mama (which is actually harder to accomplish). 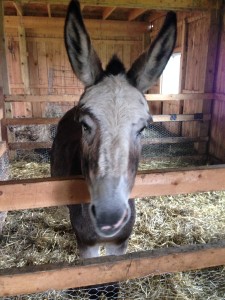 we read a few things we could try so we headed back to the barn and tried the following:

we were encouraged that the bummer was being allowed to nurse and it wasn’t being head-butted anymore. it wasn’t snuggling with mama, but it was eating and walking and this step was really important. throughout the day, we had friends over and we were able to check on them continually, snuggle the bummer lamb (allowing it some warmth) and finally by the end of the day saw that the twins began to snuggle together (while mama hung out on the opposite side of the pen).  i just don’t think this ewe has the mothering instinct. she’s just not a “good” mother, like the other ewes have been to their lambs. 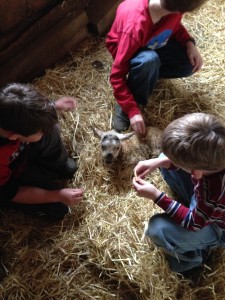 to recap, we have had seven (7) lambs born over two (2) weeks to four (4) of our ewes. we’ve more than doubled our sheep population!  two (2) of the lambs are rams, so they will stay with us until late fall. we might even send some of the older ewes to the butcher as well since they’re getting up there in years, and won’t be able to produce lambs or wool anymore. our sheep are happy and comfortable, but they still need to earn their keep! otherwise, we’d run out of grass if we keep all of the lambs! 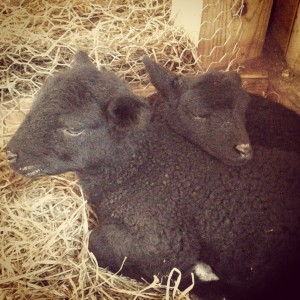 It would be best if these ewe lambs would deliver next year, instead of waiting a few years for them to start lambing. But I don’t know if I have it in me to have another stress-filled few weeks of waiting for a ewe to go into labor, stressful births, or rejected babies. I say this now, but I also said once that there was no way I’d ever reach into a sheep and pull out a lamb. There was just no way I could do it without fainting or gagging. And both Kenny and I had to do just that this year. It’s surprising what takes over you, what fears you just ignore when you realize there are no other alternatives.

“If we did all the things we are capable of, we would literally astound ourselves.”

And really, seeing those adorable lambs in the pasture, never leaving their mamas’ sides, bounding and chasing each other….it’s really the sweetest thing a small farm can witness. These spring mornings when the sunlight is urging itself through the fog after a night of rain, white buds of fruit trees and lambs rolling about in the pasture, and the birds filling in the background noise…you can’t get any better than those spring mornings!